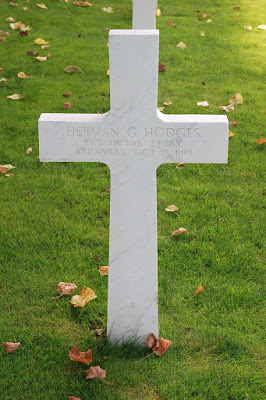 PVT Herman George Hodges was born 15 Apr 1896 in Guion, Arkansas.  He was the 6th of 10 children born to John Harvey and Lydia C. (Cypert) Hodges.  The family farmed. By 1910 Herman was working on the family farm and no longer in school. He was doing ranch work for the Warren Live Stock Company in 1917.

Likely drafted in May 1918, Herman was sent to Camp McClellan, Alabama and assigned to Machine Gun Company 116th Infantry. PVT Hodges and the 116th boarded the USS Finland in Hoboken, New Jersey and sailed for France on 15 Jun 1918.  The ship docked in the port of Saint Nazaire, France on 28 Jun 1918.  After going through trench warfare training with the rest of the 29th Division, the regiment went with the division into a "quiet" sector on the front lines.  The 29th was part of a major offensive that kicked off on 8 Oct 1918 in the vicinity of Verdun.  PVT Hodges was killed in action on 15 Oct 1918.

PVT Hodges was buried in the Meuse-Argonne American Cemetery.