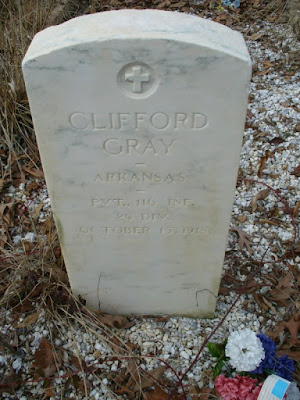 Clifford was drafted in December 1917.  Assigned to I Company 116th Infantry, he trained with the unit at Camp McClellan and then sailed for France aboard the USS Finland in June 1918.  PVT Gray was killed in action on 15 Oct 1918.

PVT Gray was repatriated in 1921.  His return was announced in the newspaper and he was re-interred near family in the Fourche Loupe Cemetery in Hot Springs, Arkansas.

Clifford's younger brother, Oscar Edward Gray served as a seaman in the U.S. Navy in WW2.
Posted by Hobie at 6:13 AM