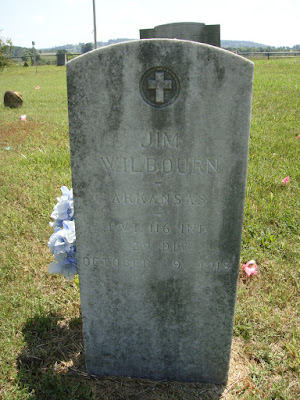 PVT James Wilbourn was born 24 May 1894 in Boone County, Arkansas.  His father is unknown but died before 1900. His mother re-married to neighbor Andrew Jackson Couch in 1906 and for a time James and his siblings used the Couch name. When "Jim" registered for the draft he was working for Glory Mining Company and claimed he was supporting his mother and step-father.

After being drafted, James was assigned to I Company 116th Infantry. Although he trained with the unit at Camp McClellan, Alabama he did not ship out for France aboard the USS Finland when the unit departed in mid-June 1918.  PVT Wilbourn is recorded as being in hospital at that time.  However, PVT Wilbourn re-joined the unit in time for the push at Molleville Farm where he was killed in action on 9 Oct 1918.

PVT Wilbourn was repatriated in July 1921, returning aboard the USAT Wheaton, and is now buried in Holmes Cemetery in Valley Springs, Arkansas.
Posted by Hobie at 6:10 PM