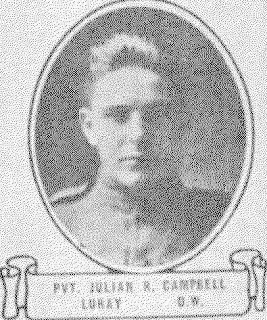 PVT Julian Richard Campbell was born 18 Aug 1897 in Page County, Virginia.  Julian was the 3rd of 9 children born to Romas and Susie Elizabeth (Moyer) Campbell. His father supported the family as a day laborer and farmer.

He trained with the unit at Camp McClellan, Alabama. On 15 Jun 1918 Julian and the unit sailed for France aboard the USS Finland.  They arrived in the French port of Saint Nazaire on 28 Jun 1918. The entire 29th Division then began training in trench warfare after which they were put on the front lines in a "quiet" sector.  The unit was then part of a big offensive or "push" in the vicinity of Verdun which began on 8 Oct 1918. PVT Campbell was wounded on 9 Oct 1918.  The following account was given by 1LT Arthur A. Grove in a letter to Julian's parents.


I will try to tell you how he was wounded. The big drive commenced on the morning of October 8th. Elwood and Julian were with the gun carts. The company advanced about 4 miles that day. Early the next morning the 9th a detail took ammunition forward to the Company. Julian was one of the detail. On their return, when about 3/4 of a mile from where the carts were a German shrapnel shell burst and wounded Julian and Pvt. Edward Eaues, of Roanoke. Eaues died the same day. Some of the men stayed with Julian and Eaues and the others ran to the road where we were for help. Elwood and I got a detail and two litters and started out to get them. On the way we met the men who were left with them and they told us that an ambulance had just picked them up and taken them to a first aid station. Elwood saw Julian and talked with him after his wound had been dressed. Julian had a bad shrapnel wound in the leg but seemed to be getting along all right and Elwood did not think it was very serious. We thought it strange that he had never written to Elwood but never thought it a fatal injury. This company was never notified and I presume the hospital people cabled it to the States.


PVT Campbell was repatriated and re-interred in Green Hill Cemetery in Luray, Virginia.

Brother, Elwood Romas Campbell, served with Julian in the Machine Gun Company but died of pneumonia on 11 May 1919.
Posted by Hobie at 8:40 AM