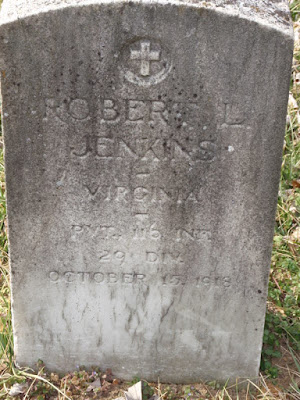 PVT Robert Lawrence Jenkins was born in 1895 in Fredericksburg, Virginia a son of Ralph Jenkins.

Robert enlisted 17 Jun 1916 in K Company 2nd Virginia Infantry. He was married to Mary W. Nail on 7 Jul 1917. When federalized the unit was reorganized as part of K Company 116th Infantry.  Robert trained with that unit at Camp McClellan, Alabama.  He was also with the unit when it sailed for France aboard the USS Finland in June 1918.  PVT Jenkins was killed in action on 15 Oct 1918.

PVT Jenkins was repatriated in 1921 and re-interred in the Fredricksburg National Cemetery in Fredricksburg, Virginia.