PVT Stearns Moon was born in May 1897 in Montgomery County, Virginia (possibly in Radford).  He was the 2nd child and eldest son of William Louis and Hattie James (Davis) Moon's 7 children. His name was sometimes spelled "Stearnes" and was spelled that way on at least some military records. His father worked as a day laborer and in a foundry as a core maker.  When he came of age, Stearns worked as a driver for several years prior to 1917.

It was probably in 1918 that Stearns was drafted. He was assigned to L Company 116th Infantry and probably trained with the unit at Camp McClellan, Alabama.  On 15 Jun 1918 he and the regiment sailed for France aboard the USS Finland from Hoboken, New Jersey.  They arrived in Nazaire, France on 28 Jun 1918.  From there the regiment went through training intended to prepare them for trench warfare.  The regiment then moved into a quiet sector.  On 8 Oct 1918, it and the rest of the 29th Division were part of a big "push" or attack on the Germans.  PVT Moon was killed in action on 12 Oct 1918. 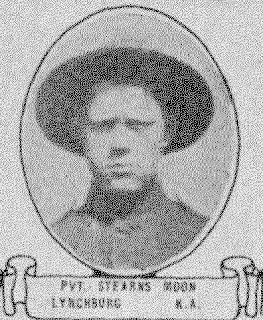 PVT Moon was repatriated and re-interred in Spring Hill Cemetery in Lynchburg, Virginia. The local post of the VFW took responsibility for acquiring and placing his military marker which they did in 1928.

Great Grandfather Thomas B. Pickering served as a SGT in K Company 24th Virginia Infantry in the Civil War (May 1861 - December 1864).
Posted by Hobie at 8:24 PM