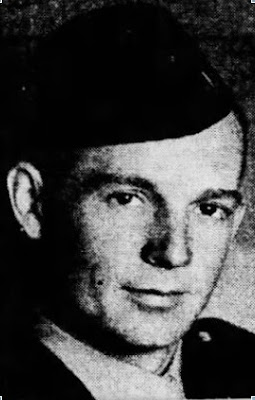 2LT Thomas Turner Smith was born 15 Jul 1914 in Auxvasse, Missouri. He was the youngest and only son of the 2 children born to Thomas William and Mary Edna (Turner) Smith. He was called "Turner" by his family, no doubt to distinguish him from his father. The elder Thomas had farmed near Liberty, Missouri before dying in 1928 at the age of 49. Shortly after his father's death his sister found employment at the Pima Agency in Sacaton, Arizona and he moved to Arizona with her. While living with his sister he attended Casa Grande High School where he played football well enough to get a place on the all-state high school team. He then attended the Arizona State Teachers college in Tempe, Arizona. While there he met and married Winifred Marjorie Chappel who would also graduate with a Masters degree. Both became teachers and Turner worked for the Pinal County school system. The couple had a daughter in December 1940.

Turner enlisted in the Arizona Army National Guard and left after 2 years. Although discharged, he enlisted again in March 1942. We know he served with C Company 166th Infantry in the 97th Division. That regiment never left the United States during the war. 2LT Smith was apparently wounded while serving with the 1st Army.

Transferred from 86th Replacement Battalion to E Company 116th Infantry to serve as a Platoon Leader on 22 Jun 1944. The company was, at that time, in the vicinity of La Blotrie, France. The company was 1/2-mile east of Martinsville, France, participating in the drive to liberate the critical crossroad city of Saint-Lo, when 2LT Smith was wounded on 12 Jul 1944 and evacuated to hospital. He returned to the unit now in the vicinity of Le Moulin Eveque on 20 Jul 1944 but this may have been premature. He was sent back to the hospital due to complications from his wound on 31 Jul 1944. He returned to the 2nd Battalion on 20 Aug 1944 but, because he was not needed at that time in E Company, was assigned to G Company then 3/4-mile southwest of Chevry, again as a Platoon Leader. G Company was part of the divisional attack to liberate Brest, France. 2LT Smith was wounded in that fighting on 1 Sep 1944 as his unit fought towards La Trinite, France and was again evacuated to hospital. He died of his wound(s) there on 3 Sep 1944.

2LT Smith was repatriated in 1948 and re-interred in Thayer Cemetery in Thayer, Missouri.
Posted by Hobie at 10:00 AM