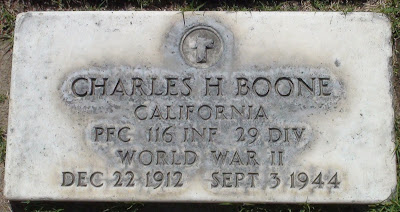 PFC Charles Harry Boone was born 22 Dec 1912 in Stockton, California to Franklin Henry and Wilhelmena Freidarika (Schmidt) Boone.  His father farmed. His mother was a German immigrant. Charles married Helen Lenora Bucholtz on 17 Nov 1934.  They had one daughter, Delores Ann, who died in infancy. In 1940, Charles was working as a teamster and reported making $1200 in 1939.

PFC Boone was repatriate in 1949 and now rests forever in the Turlock Memorial Park in Turlock, California.
Posted by Hobie at 5:12 AM