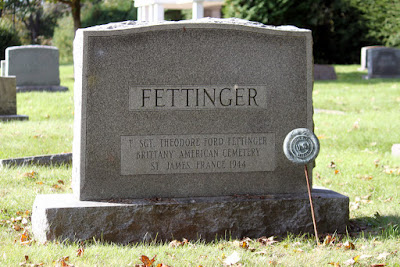 TSGT Theodore Ford Fettinger was born 14 Oct 1922 in Newark, New Jersey to Edwin Forrest and Louise Houghton (Ford) Fettinger.  His father worked as a secretary for an advertising agency.  Theodore attended the Forestry school in the University of Maine.

After Theodore left school to serve his country he was sent overseas and assigned to G Company 116th Infantry.  It appears that he was with the unit on D-Day.  On 20 Jun 1944 he was promoted to SSG and then on 19 Aug 1944 he was promoted to TSGT.  As a platoon sergeant, he was reportedly shot by a sniper as the unit attacked German positions in Brest, France.  TSGT Fettinger was killed in action on 17 Sep 1944.

TSGT Fettinger is buried in the Brittany American Cemetery. There is a cenotaph in his memory in Laurel Hill Cemetery in Saco, Maine.
Posted by Hobie at 7:16 AM