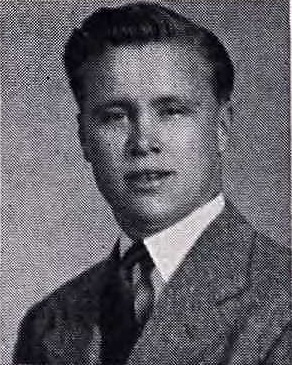 PFC Howard Harry Ruby was born on 6 Apr 1924 in Elwood City, Pennsylvania. He was the 6th of 10 children born to Clifford James and Iva Louise Elizabeth (Weller) Ruby. 2 siblings had died in infancy before he was born. His father worked for the National Tube Company manufacturing seamless steel tubing earning a reported 1939 income of $2712 which seems quite a bit above average for the time. The family home on River Road in Franklin was valued at $3000. Howard attended Lincoln High School in Elwood City but didn't graduate in 1943.

Howard was drafted in March 1943. After his basic military training he was eventually sent to the European theater and transferred from the replacement depot to F Company 116th Infantry on 23 Jul 1944 where he served as a rifleman. PFC Ruby fought with the unit from Saint-Lo to Vire and then Brest before he was killed in action 17 Sep 1944.

PFC Ruby was first buried at the Brittany military cemetery and repatriated in 1948. His older brother, PVT Clifford Thomas Ruby was serving with the 23rd Infantry when he was killed in action near Hill 192 in the vicinity of Saint-Lo on 26 Jul 1944. He was initially buried at the military cemetery at St. Laurent and repatriated with Howard. The brothers were re-interred together in the North Sewickley Cemetery in North Sewickley, Pennsylvania.

Great, great-grandfather, Andrew H. Ruby served as a PVT in E Company 78th Pennsylvania Infantry (USA). Sister, Grace Catherine Ruby, served as a SSG in the Women's Army Corps during the war. Brother, Jack Robert Ruby, served as a CPL in the U.S. Army in Korea.
Posted by Hobie at 5:39 PM