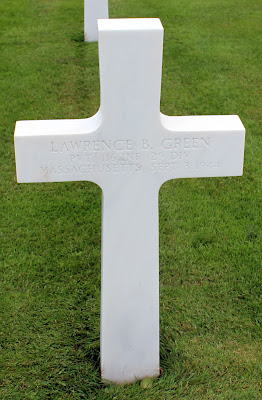 PVT Lawrence B. Green was born in 1912 in Fitchburg, Massachusetts to Harold Alfred and Bernice Edna (Baldwin) Green. His father worked as a driver and shipper. On 1 Jun 1934, Lawrence married Elsie Lord Brown.  In 1940, Lawrence was working as a shipper and Elsie as a bookkeeper.  They had no children and a reported 1939 income of $2371.

When Lawrence enlisted in January 1944 he was working as a lumber grader.  We don't know when, but Lawrence was assigned to F Company 116th Infantry.  On 3 Sep 1944 PVT Green was injured, evacuated and died of that injury.

PVT Green is buried in the Brittany American Cemetery. Elsie re-married.
Posted by Hobie at 5:23 PM