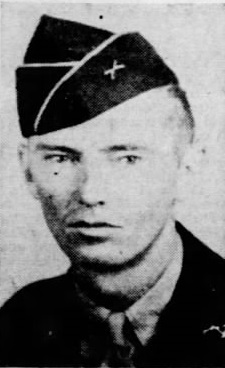 PVT Robert G. Quintal was born 30 May 1914 in Cheboygan, Michigan. He was the 4th of the 8 children born to Frank E. and Sarah Elizabeth (Hanna) Quintal. The family moved to Port Huron, Michigan in 1920. His father father was a barber but he died in 1923 at the age of 53. 3 of his siblings died before 1924. His older brothers supported the family and Robert was able to attend Port Huron High School. After high school Robert went to work for Mueller Brass Company now Mueller Industries.

Robert was drafted in March 1943, trained at Fort Jackson, South Carolina and after a 14-day furlough he went to England in January 1944. He was assigned to A Company 116th Infantry and survived the D-Day landing at Omaha Beach on 6 Jun 1944. He continued to fight with the unit until wounded on 15 Jul 1944 near Saint-Lo, France. He spent some time recovering in an English hospital and returned to the unit on 17 Aug 1944. PFC Quintal was in action with A Company until killed in action on 6 Sep 1944.

PFC Quintal was repatriated in 1948 and re-interred in Lakeside Cemetery in Port Huron, Michigan.
Posted by Hobie at 4:07 PM