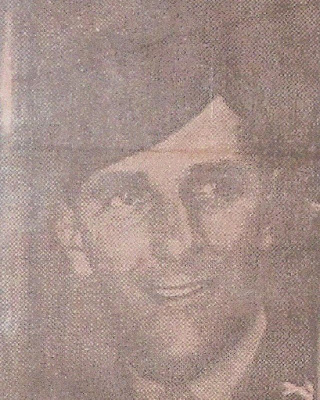 PVT Philip Anthony Ronca was born 24 Sep 1916 in Bethlehem, Pennsylvania. He was the oldest of the 7 children born to Pasquale and Philomena (Orrico) Ronca. A brother, Michael, was born prematurely and died in infancy. His father was a building contractor. Philip attended Liberty High School and graduated in 1936. he then went to work for Bethlehem Steel and designed homes for his father. He became a member of both the Knights of Columbus and the Fraternal Order of Eagles. He married Viola E. Schlener in December 1941 and they had a daughter in June 1942. His mother died a month later from injuries she sustained when her home's heating furnace exploded.

Philip was drafted in December 1943 and after completing basic training at Camp Blanding, Florida was sent to the European theater on 29 Jun 1944. PVT Ronca was transferred from the replacement depot to L Company 116th Infantry on 3 Sep 1944. The unit was in the midst of the attack on Brest and PVT Ronca was killed in action there on 8 Sep 1944.

PVT Ronca was repatriated in 1948 and re-interred in the Holy Saviour Cemetery in Bethlehem, Pennsylvania.

Two of Philip's brothers also served in WW2, Pasquale Frederick Ronca in the U.S. Army and Robert Francis Ronca in the U.S. Navy. Their youngest brother, Richard John Ronca served during the Korean War. Viola re-married. Philip is survived by 4 grandchildren and several great grandchilden.
Posted by Hobie at 7:39 AM