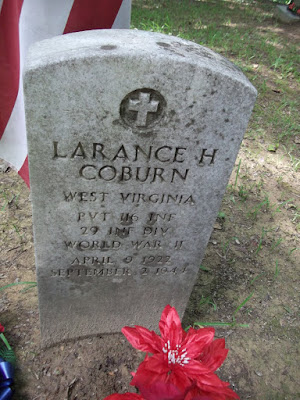 Larance was drafted in September 1943. Shortly thereafter he married Leona Dempsey, also of Logan County and in 1944 they would have a son. We don't know when Larance went overseas but he was assigned to H Company 116th Infantry on 13 Aug 1944 when he was promoted to PFC.  PFC Coburn was killed in action on 2 Sep 1944.

PFC Coburn was repatriated in 1948 and is buried in the Home Sweet Home Cemetery in Logan County, West Virginia.  Leona did not re-marry until 1950.  Their son died in 2012 and a grandson and great-granddaughter survive.
Posted by Hobie at 7:43 AM