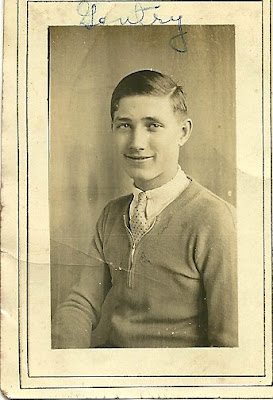 PVT George Gentry Murphy was born in Back Bay, Virginia on 6 Dec 1922. He was the 2nd of 6 children born to Lonnie Lee and Mittie Virginia (Styron) Murphy. His father farmed for others. In 1940 they were paying $12 a month rent and George was working as a truck driver for a road construction crew reporting a 1939 income of $231. In September 1941 George married a neighbor girl, Mildred Virginia Pallett. In 1942, George was working for Quarter Master Corporation.

George was drafted in November 1943. After basic training he was sent to the European theater. Mildred delivered a son in April 1944 but George was already overseas. PVT Murphy was transferred from the replacement depot to C Company 116th Infantry on 5 Jul 1944. He fought with that unit until killed in action on 1 Sep 1944.

PVT Murphy was repatriated and re-interred in the Charity United Methodist Church Cemetery in Virginia Beach, Virginia.
Posted by Hobie at 6:48 PM