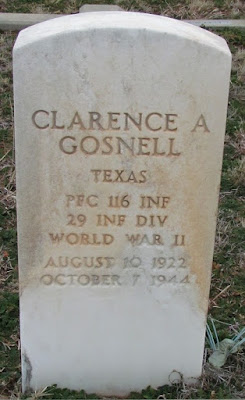 PFC Clarence A. Gosnell was born 10 Aug 1922 in Scott County, Arkansas to James Arthur and Cora Bell (Brown) Gosnell.  The family farmed.  They also moved quite a bit for the time living in Waldron and Mena, Arkansas before moving to Swisher County and Wheeler County in Texas.  His father died in Wheeler County in 1942.

Clarence was probably drafted in November 1943.  He was sent to Europe and transferred from the replacement depot to K Company 116th Infantry on 24 Jul 1944.  Clarence was wounded on 29 Aug 1944 and evacuated to the hospital.  On 19 Sep 1944 he was returned to the regiment from the replacement depot but this time he went to L Company 116th Infantry.  PFC Gosnell was killed in action while serving with that unit on 7 Oct 1944.

PFC Gosnell was repatriated in 1948 and is buried in Texola Cemetery in Texola, Oklahoma.
Posted by Hobie at 8:09 PM