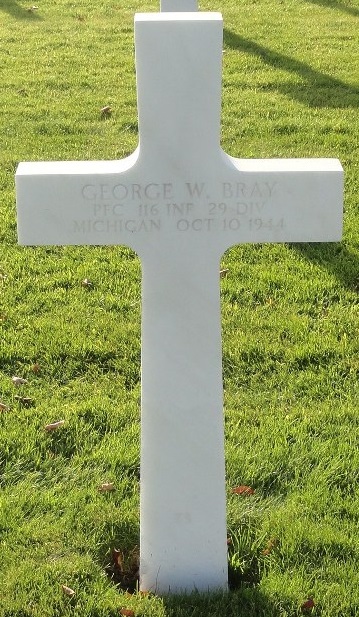 PFC George W. Bray was born about 1915 in Missouri to James Oscar and Nora Leona (Coon) Bray.  His father worked as a driver.  In 1930 George was living with his mother and step-father and working as a clerk in a grocery. On 16 May 1935 he married Alice Crossley and they had a son in March 1937.  In 1940 he was working in road construction.

Alice re-married and their son was adopted by his step-father.  He served as a finance officer during the Vietnam war.
Posted by Hobie at 6:26 AM

Email ThisBlogThis!Share to TwitterShare to FacebookShare to Pinterest
Labels: Henri-ChapelleAmericanCemetery, I Company