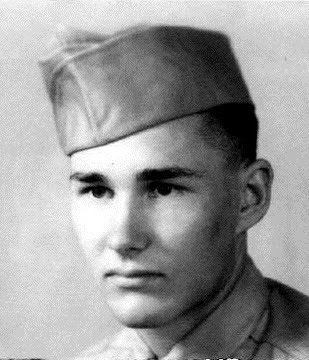 PFC Hairston Cumberland, b. 27 Nov 1924 - d. 7 Oct 1944. Son of Wheeler Lewis and Susan Francis (Copeland) Cumberland of Philadelphia, Mississippi. Hairston was a star football player in his high school and his jersey was retired and displayed until a fire burned the school in 1950. Hairston was drafted in 1943 and ultimately assigned to Headquarters Company 2nd Battalion 116th Infantry. He is buried in Cedarlawn Cemetery in Philadelphia, Mississippi.

His unit was in reserve near Kerkrade, Holland when he was in a jeep transporting coils of wire with 4 other soldiers from 2nd Battalion's signal section when the vehicle struck and detonated a German mine. 4 men, including PVT Cumberland were killed. Dying with him were CPL Wimburne Phinney, PVT Marcus Segan, and PVT Earl Dale Potter.
Posted by Hobie at 5:17 AM

Email ThisBlogThis!Share to TwitterShare to FacebookShare to Pinterest
Labels: HQCo2ndBn