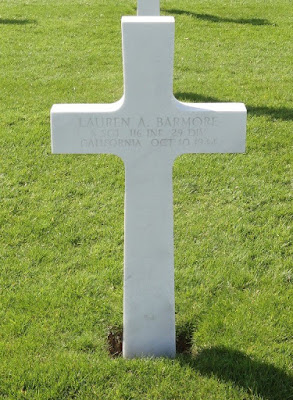 SSG Lauren A Barmore son of Royal Cook and Mary J (Aldred) Barmore of Placer County, California was born 17 May 1914.  He was the 2nd of his mother's 2 children. His mother died 4 Oct 1915 and his father re-married a year later.  Royal had 3 children by his second wife.

Lauren was drafted in March 1941.  We don't know where he was or what he was doing but we do know that he was transferred from the replacement depot to I Company 116th Infantry on 3 Sep 1944 and was already a Staff Sergeant.  This would indicate that he had some experience by this time.  It was common for soldiers who had been wounded to go from unit to hospital to replacement depot to a unit other than the one in which they had been serving when they were wounded.  We also know that he was killed in action on 11 Oct 1944.

Email ThisBlogThis!Share to TwitterShare to FacebookShare to Pinterest
Labels: Henri-ChapelleAmericanCemetery, I Company