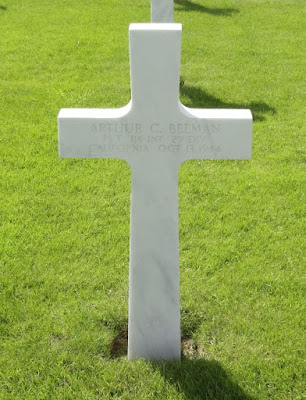 PVT Arthur Colvin Beeman was born 25 Jul 1912 in Pueblo, Colorado to Arthur and Helen Myrtle (Colvin) Beeman.  His father had farmed, worked with his father as a blacksmith, a carpenter and various other things as the family drifted across the country, from Colorado to Kansas to California.

PVT Beeman is buried in the Henri-Chapelle American Cemetery.  Hattie remarried before 1948.  Their daughter is still living.
Posted by Hobie at 6:35 PM