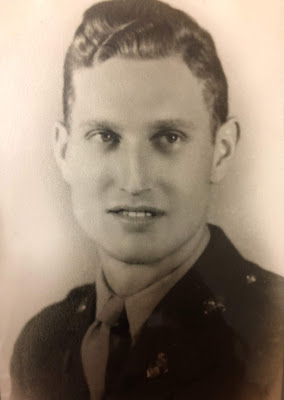 John was drafted in August 1943. After his basic military training he was sent overseas to the European theater and 1 year later found T5 Roll transferred from the replacement depot to I Company 116th Infantry just as the regiment liberated Vire, France. Only 4 days later he was transferred to L Company serving as a rifleman in both units. He was promoted to SGT and reassigned as unit armorer on 6 Sep 1944 as the regiment attacked Brest. He continued to serve with the unit but was wounded in the vicinity of Aachen, Germany on 6 Oct 1944 and evacuated to a field hospital where he died of his wound(s) on 7 Oct 1944.

SGT Roll was repatriated in 1947 and re-interred in the Millville Cemetery in Millville, Ohio.

His younger brother Corliss James Roll entered the service in 1943 and eventually retired as an LTC in the Dental Corps. A dental clinic at Fort Leonard Wood was named for him.
Posted by Hobie at 8:06 PM

Email ThisBlogThis!Share to TwitterShare to FacebookShare to Pinterest
Labels: I Company, L Company