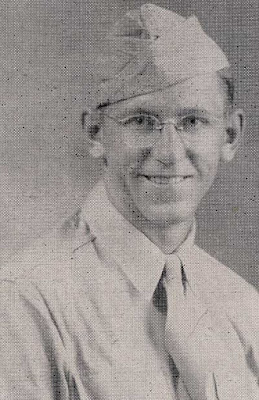 PVT Harold Rex Fortney was born 4 Jun 1916 in New Sharon, Iowa to John Harrison "Henry" and Bessie Grace (Jenkins) Fortney.  Harold had 9 siblings one of whom died at birth. "Henry" was a blacksmith who sometimes worked for "the railroad".  Harold's grandfather, Henry M. Fortney, served as a Corporal in A Company 118th Illinois Infantry during the Civil War after which he migrated to Iowa.

On 10 Oct 1944 PVT Fortney was assigned from the replacement depot to A Company 116th Infantry.  On 13 Oct 1944 he was killed in action near Aachen, Germany.  He is buried in the Henri-Chapelle American Cemetery and there is a centotaph in Forest Cemetery in Oskaloosa, Iowa.

Margaret remarried after the war.  So far as we can determine they had no children.
Posted by Hobie at 5:19 PM

Email ThisBlogThis!Share to TwitterShare to FacebookShare to Pinterest
Labels: A Company, Henri-ChapelleAmericanCemetery