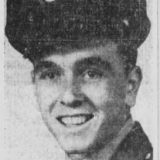 PVT David Ralph Spinosi was born 9 Dec 1922 in Philadelphia, Pennsylvania. He was the eldest of Amedeo and Nadina (Paci) Spinosi's 6 children. Both of his parents were from Colonnella, Italy. By 1930 the family had moved to Franklin, New Jersey where they lived with his father's brother Michael and his family of 10 on Dutch Mill Road. Amedeo was then working as a tailor in his own shop but he would eventually open several clothing stores and in 1940 he owned a home on Dutch Mill Road valued at $4000 and reported a 1939 income of $1000. David would also go into the clothing trade working with his father at H. Mennies' Sons Men's Store in Vineland, New Jersey.

David was drafted in January 1943 and after completing is basic military training was sent to England about October 1943. We do not know to which unit(s) he may have been assigned but he was transferred as a T4 from the replacement depot to L Company 116th Infantry on 4 Sep 1944 to serve as a squad leader. He would then have fought with the unit as the 29th Division participated in the liberation of Brest, France. For some now unknown reason David was reduced to PVT on 21 Sep 1944. PVT Spinosi would continue to serve with L Company as it fought with the 116th into Germany. It was near Aachen, Germany that PVT Spinosi was killed in action.

PVT Spinosi was rests forever in the Henri-Chapelle American Cemetery.

David's father was a combat veteran of the first World War having fought in the Meuse-Argonne Offensive with A Company 315th Infantry, 79th Division.