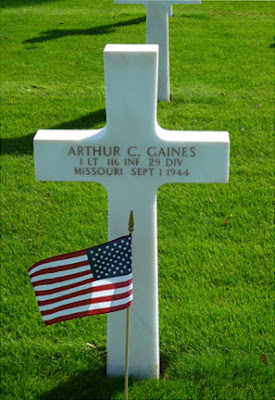 1LT Arthur Charters Gaines was born 2 Oct 1911 in Saint Louis, Missouri to Arthur Judson and Olive Sarah (Charter) Gaines. His father worked as a business manager for an orchestra.  His parents divorced before 1930. His mother worked as a social director at a school.  In 1940, Arthur was working as an attorney.  He reported no income for 1939.  In 1940, his father was manager for the Orchestral Association of Minneapolis. Before 1940 he married Aurelia P. Gerhard.

When Arthur was drafted he was still working as an attorney. Sometime after he was selected for and attended officer training.  He apparently was also divorced from Aurelia. Arthur married Luvera M. Lackey on 23 Jun 1943.  Arthur was sent overseas and on 22 Jul 1944 he was transferred from the replacement depot to E Company 116th Infantry as a platoon leader.  He was made commander on 8 Aug 1944 and on 16 Aug 1944 made executive officer when a senior officer was appointed as commander. 1LT Gaines was killed in action on 1 Sep 1944.

1LT Gaines is buried in the Brittany American Cemetery.

His wife, Luvera, enlisted as an aviation cadet in December 1942.  We are not aware of any children from either marriage.