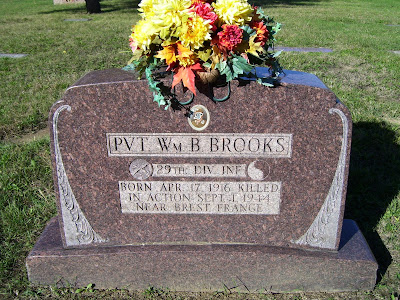 PVT William B. Brooks was born 17 Apr 1916 in Macon County, Illinois to James Thomas and Frances Josephine (Coppedge) Brooks.  His father worked in a rolling mill, as a salesman in a furniture store, and in a confectionary which his son William owned in 1940. In 1937, William married Ida M. and in 1939 they had a daughter.

After William entered the service he was sent overseas.  We think that he was assigned to H Company 116th Infantry prior to the D-Day landings.  He was a light mortar crewman.  He was with that unit when he was killed in action on 1 Sep 1944.

PVT Brooks is buried in Fairlawn Cemetery in Decatur, Illinois along with many family members.
Posted by Hobie at 8:07 AM