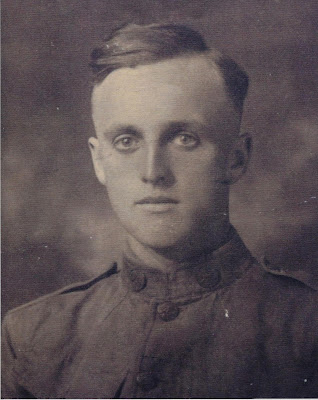 CPL Robert Lee Perrow Jr was born 26 Jul 1892 in Campbell County, Virginia. He was the 2nd of 8 children and oldest son born to Robert Lee and Nancy Lucie (Cocke) Perrow. His father was Sheriff of Campbell County for 35 years and a farmer.

Robert likely enlisted for the Mexican Border service in 1917 and was in L Company 1st Virginia Infantry when it was reorganized as part of  L Company 116th Infantry in 1918.  He trained with the unit at Camp McClellan, Alabama.  On 15 Jun 1918 he sailed for France with his unit aboard the USS Finland.  After arriving on 28 Jun 1918, the regiment trained for trench warfare and was then put into a "quiet" sector.  CPL Perrow was killed in action on 15 Oct 1918.

CPL Perrow rests forever in the Meuse-Argonne American Cemetery. There is a cenotaph for him in the Perrow-Merryman Cemetery in Lynchburg, Virginia.

Brother, Stanley Perrow, also served (1917-1919) as a CPL in L Company 116th Infantry and was wounded. Brother, John Flemming Perrow, was gassed while in service with G Company 7th Infantry. Brother-in-law, Nicholas Alexander Samouce, was a SGT in L Company.
Posted by Hobie at 5:39 AM