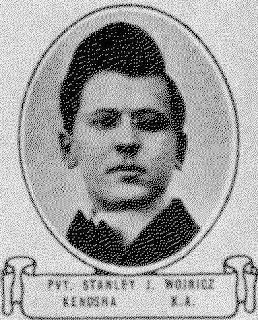 PVT Stanley John Woinicz was born 15 Nov 1890 in Staravies, Poland to John and Adda Woinicz. The family name is also spelled "Wojnicz" and the family immigrated in 1906 and lived in Kenosha, Wisconsin which had a large Polish population. In 1910, Stanley was working in a bed factory. By 1915, Stanley had his own business working as a photographer. He would seem to be well educated judging by his excellent penmanship. He was living at 105 Milwaukee Avenue in Kenosha and working out of his home. He reported that he was supporting his mother and 2 sisters.

Stanley was likely drafted in May 1918 and then assigned to B Company 116th Infantry.  He sailed with the unit for France aboard the USS Finland.  The ship departed Hoboken, New Jersey on 15 Jun 1918 and took almost 2 weeks to transit the Atlantic Ocean, arriving in the port of Saint Nazaire, France on 28 Jun 1918. Stanley participated with his unit in the trench warfare training that the 29th Division experienced. He was still with the unit when a major offensive began on 8 Oct 1918 and was killed in action on 15 Oct 1918.

PVT Woinicz now rests forever in the Meuse-Argonne American Cemetery.
Posted by Hobie at 6:03 AM

Email ThisBlogThis!Share to TwitterShare to FacebookShare to Pinterest
Labels: B Company, Meuse-ArgonneCemetery