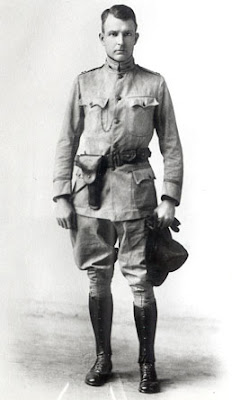 The following was posted by Cenantua on CPT Conrad's FindAGrave memorial:


Class of 1905, Virginia Military Institute; Class of 1910, University of Virginia law school; became a partner in the law office of his father. On June 19, 1916, Conrad was called-up as a captain in the Virginia National Guard, and went to the Border with the Second Virginia Regiment, and was stationed at Brownsville, Tex., for eight months. The Second Virginia was mustered out of Service in February, 1917, but was called into Federal Service again in a few weeks. Captain Conrad, as commanding officer of Company "L," then did guard duty on the Southern and Norfolk and Western Railroads for five months, after which the Second Virginia was ordered to Camp McClellan, Anniston, Ala., and there became a part of the Twenty-ninth, or "Blue and Gray" Division. After nine months' training, the regiment sailed for France, June 15, 1918.


He was wounded on the Verdun front Oct. 8, 1918, and died the next day. Posthumously, Conrad was awarded the Distinguished Service Cross for "extraordinary heroism in action near Samogreux, France, on Oct. 8, 1918," according to archive information. Although Conrad was buried at Verdun.


From the Washington Post 10/10/1920: Honor Capt. Conrad's Memory Special to The Washington Post. Winchester, Va., Oct. 8. - Services in memory of Capt. Robert Y. Conrad, the only commissioned officer from Winchester killed in the world war, were held yesterday in Mount Hebron Cemetery by officers and members of Company I, First Virginia regiment, known locally as "Capt. Bob's" company. Capt. Conrad was mortally wooded October 8, 1918, while leading his men at Malbrouck Hill. Taps was sounded by the company bugler at the foundation of a monument to be erected in the cemetery in memory of Capt. Conrad.


[Letters from two of his Lieutenants:


"At your request, it gives me pleasure to write of my C. O., Captain Robert Y. Conrad, Co. 'I,' 116th Inf., A. E. F. I was one of his Second Lieutenants, and was from Newark, N. J., of the 'Blue and Gray' Division. I either served immediately under him, or with him. in the 116th Infantry, from May 1, 1918, and I knew him well, and admired him greatly. A fine big fellow, and every inch a man and a soldier. Loved by all his men who expressed their confidence in him by saying they would follow him through Hell, and they would, and they did.


"In the Meuse-Argonne Offensive, Captain Conrad's Company was in the thick of it, being assaulting Company, the first day. "Captain Conrad was shot through the head, leading his men, on the morning of October 8, 1918, between nine and ten o'clock, at the Enemy's third line trenches.


"In the violence of their assault, they (his Company) had swept beyond the objective set for them, and, at the third line trench, met a murderous machine-gun fire, and Captain Conrad fell mortally wounded.


"His men gave him first aid, and German prisoners (captured by his Company) carried him to the rear.


"Private I. Auemange of his Company told me that the Captain urged his men to go forward, saying: 'Don't bother with me. Go ahead!' He died the same day at Gloneux, in sight of Verdun, to the South-west.


"He was shot in the Bois Brabant-Sur-Meuse. I write these details as they were given to me. I was at the time on Detached Service at Grondue Courts. With this letter I give you a photograph of Captain Conrad's grave, made by me on the 24th of March. And I also give you the negative, as you desire to have an enlargement made, to present to the V. M. I. where Captain Conrad received his military education. The School should be proud of him, and it is a pleasure to me to write this remembrance of my Captain Conrad.


"Our Captain, Robert Young Conrad, commanding Company I, 116th Infantry, a man's man, beloved by all who knew him! Time after time, his men spoke of him, saying they would follow him through Hell. With his face to the foe, he fell upon the Field of Honour, mortally wounded, while leading his men forward toward the Enenay's third line trenches, the morning of the 8th of October, 1918. His Company was the assaulting Company, on the right. As the hour approached, he was among his men speaking words of cheer.


"At the first gun, the shrill blast of his whistle started the men forward across 'No Man's Land' toward the German lines. He was like a boy at a picnic, going hither and thither, encouraging here and driving there. On and on he led them, until the objective was almost reached — when a murderous stream of machine-gun fire from the Bois-Brabant-Sur-Meuse temporarily haulted his men. Undaunted, fearless, he passed among them; gathering them together, he led them forward, until he fell mortally wounded. Hurriedly, he was evacuated to the rear by German prisoners captured by his men, and a noble effort was made to save his life.


The Supreme Sacrifice was made, and an American Hero sleeps on the sunny fields of France.


His young wife wrote: ''It makes me so happy to hear of his beautiful deeds; he was always helping some one and mostly by the example of his happy, trustful nature. His mother sent me the last three letters he wrote her, and in one of them he says: 'All old people will have me for a friend forever. I never saw one that I remember who couldn't teach me something, and very, very few were not very kind and very generous.' Isn't it strange that he should write that, just as you tell me about his stand for General Shipp?


"He only taught me 'the glory of the trenches,' and, so, that is all I have ever been able to see, and I know he is content."


The "Distinguished Service Cross" was awarded to him, posthumously, by direction of the President, tb rough the Commanding General, A. E. F., with the Citation as follows: "Robert Y. Conrad, Captain. 116th Infantry. "For extraordinary heroism in action near Samogneux, France, October 8, 1918. "Captain Conrad led his Company in assault, capturing many prisoners and machine-guns. He continually inspired h's men by utter disregard of danger, and was mortally wounded, while leading a charge on a machine-gun nest."


A daughter was born to Captain and Mrs. Conrad, after his death, and has been named for her father, and will be called "Robbie."

Email ThisBlogThis!Share to TwitterShare to FacebookShare to Pinterest
Labels: DSC, I Company, VMI