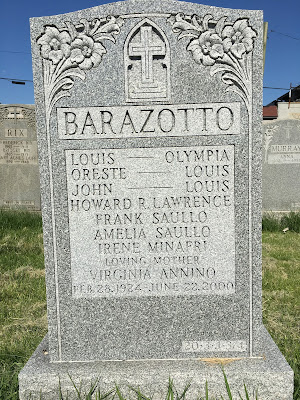 PVT John Vincent Barazotto was born 8 Aug 1894 in Manhattan, New York. He was the 2nd of 8 children born to Louis (Luigi) and Olympia (Buchignani). His parents were both natives of Italy.  His father worked in a bakery and later was able to own his own bakery and grocery. John was married to Catherine Chiecco on 24 May 1913.  The would have a daughter in 1915 and a son in 1917. In 1917, John was working as a printer for the West Broadway Printing Company at 423 West Broadway. The couple lived at 178 West Houston Street, New York.

PVT Barazotto was repatriated in June 1921, being returned aboard the Wheaton to the port of departure, Hoboken, New Jersey. John was re-interred with family in Calvary Cemetery in Queens, New York.

Wife Catherine would re-marry in 1920. Son, John Vincent Barazotto Jr., served in the U.S. Navy during WW2. John has many living descendents.
Posted by Hobie at 6:59 PM