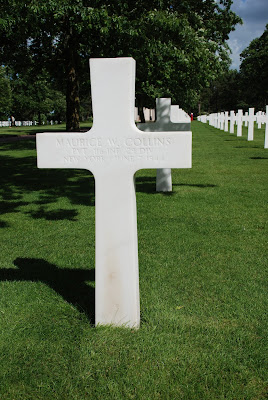 PVT Maurice William Collins was born about 1911 in New York to Parker A, and Mary E (Smith) Collins.   The family lived for may years at 1553 East 19th Street in Brooklyn, New York. Parker was a contractor. In 1940 William (as his family called him) was working for an oil company.

After William entered service (as Maurice W. Collins) he was sent overseas and assigned to M Company 116th Infantry.  He was with the unit on D-Day when he was wounded and he died of those wounds on 7 Jun 1944.

William is buried in the Normandy American Cemetery.