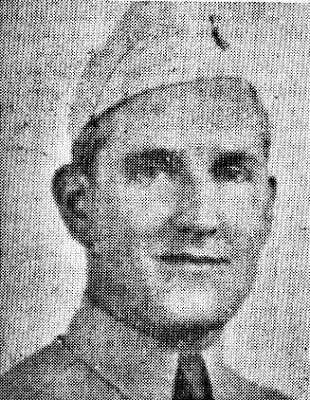 1SG Marvin Cerebrum Fielding was born 21 Apr 1911 in Augusta County, Virginia to Marvin Booker and Nora Belle (Brightwell) Fielding.  The family of 9 farmed.  About 1936, Marvin married Laura Anderson Payne and they had 1 daughter.  In 1940, Marvin was working as a spinner in a rayon plant and reported a 1939 income of $1740.

When his National Guard unit was federalized in February 1941, Marvin was already a SGT.  As a member of L Company 116th Infantry, Marvin trained with the unit for the D-Day assault on the French beaches in Normandy code-named "Omaha".  After the landing he fought with his unit until he was killed in action on 31 Aug 1944.

1SG Fielding is buried in the Brittany American Cemetery.  His name is recorded on a memorial at the Thomas D. Howie Memorial Armory (now Readiness Center) in Staunton, Virginia.

1SG Fielding's grand-nephew also served in a descendant unit of L Company stationed in the Staunton, Virginia armory and attained the rank of 1SG and was deployed in the Global War on Terror.
Posted by Hobie at 7:40 AM