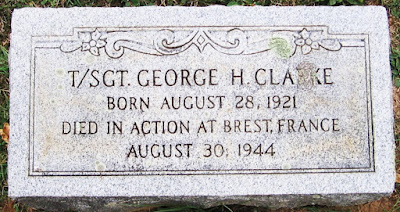 TSGT George Harold Clarke was born 28 Aug 1921 in Augusta County, Virginia to Robert L. and Lola Agnes (Gibson) Clarke. His parents divorced in 1922.  In 1940 George was living with his mother in his maternal grandparents' home.

George was a private in the Staunton, Virginia unit of the National Guard when the unit was federalized in February 1941.  That was L Company 116th Infantry.  He was still with that unit right through to the D-Day landing and beyond.  It is unclear when he was wounded but he died of those wounds on 30 Aug 1944.

TSGT Clarke is buried in Thornrose Cemetery in Staunton, Virginia.
Posted by Hobie at 8:18 PM