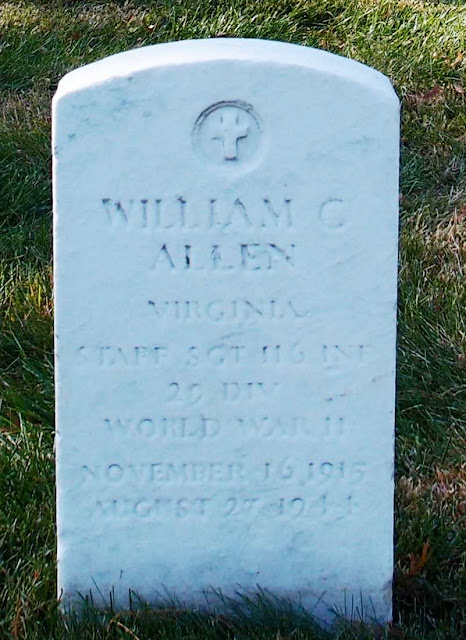 SSG William C. Allen was born 16 Nov 1915 to William Milton and Lena Nelson (Roberts) Allen in Summit Point, West Virginia.  His father farmed in Jefferson County, West Virginia and later, in Clarke County, Virginia. In 1940 his father was working for the WPA and William was working as a "pressman" for a rubber company.

William joined the National Guard and was a CPL in the Winchester based infantry unit in February 1941 when the unit was federalized.  As a member of I Company 116th Infantry he participated in the amphibious landing on D-Day.  Wounded on 6 Jun 1944, William did not return to his unit until 29 Jul 1944.  SSG Allen was killed in action on 27 Aug 1944.


SSG Allen is buried in Arlington National Cemetery.
Posted by Hobie at 5:18 AM

Email ThisBlogThis!Share to TwitterShare to FacebookShare to Pinterest
Labels: ArlingtonNC, I Company