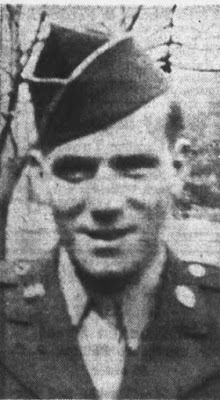 PFC George Michael Phillips Jr was born 15 Dec 1918 in Georgetown, Pennsylvania (Luzerne County). He was the 2nd of 4 children born to George Michael and Grace (Eslick). His father was a coal miner. Young George attended West Wyoming High School. George married Margaret Thomas in February 1939. The couple lived at 139½ East Bennett Street in Kingston, Pennsylvania and George worked in the shipping department of a cigar factory while Margaret as an examiner there. The couple reported a 1939 income of $1350 and rented their apartment for $22 a month. Then George took a job in New Jersey working for General Motors. George and Margaret had a daughter, Rachel, born in 1942.

George was drafted in November 1943. He attended training at Fort McClellan, Alabama, was then sent to Fort Meade, Maryland and then sent overseas and was assigned to I Company 116th Infantry. He landed with the unit at Omaha Beach on D-Day, 6 Jun 1944. PFC Phillips fought with the unit through the hedgerows, Saint-Lo and Vire. PFC Phillips was wounded on 27 Aug 1944 as the 116th Infantry began the attack on Brest, France. Evacuated to hospital, he died of his wound(s) on 27 Aug 1944

PFC Phillips was buried in the Brittany American Cemetery.

Brother, James Beddal Phillips, served as a PFC in the U.S. Army in the war. Margaret re-married but died in 1958.