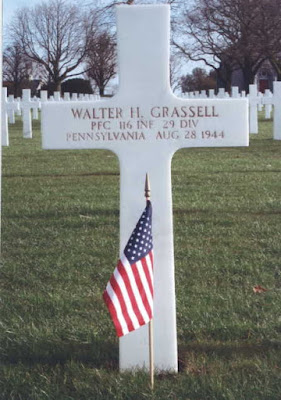 PFC Walter H. Grassell was born 27 Feb 1919 in Washington County, Pennsylvania to Walter Frank and Hattie (Noble) Grassell. The elder Walter worked in a tile mill and a glass factory.

Walter was drafted in August 1941.  We don't know where he was until 21 Jul 1944 when he was transferred from the replacement depot to F Company 116th Infantry.  PFC Grassell was killed in action on 28 Aug 1944.

PFC Grassell is buried in the Brittany American Cemetery.
Posted by Hobie at 8:49 PM