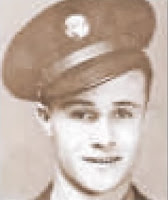 PFC Charles Savary Jr. was born 24 Sep 1924 in Minersville, Pennsylvania. He was the eldest of the 2 sons born to Charles and Mary (Kidora) Savary. Charles was Mary's second husband and she came into the marriage with 3 children by her first husband. His father worked as a carpenter at the Oak Hill Colliery. Young Charles started playing the violin at age 9 and was later in the high school orchestra. Charles went into mining before 1943.

Charles was drafted in May 1943. After his basic military training he was sent to the European theater. PFC Savary was transferred from the replacement depot to K Company 116th Infantry on 24 Jul 1944. He then fought with the unit in the liberation of Vire before moving with the unit into Brittany. PFC Savary was killed in action on 30 Aug 1944 near La Trinite in the effort to take Brest from the Germans.

Charles' brother, Paul Savary, served in the U.S. Navy during the war.
Posted by Hobie at 6:01 PM