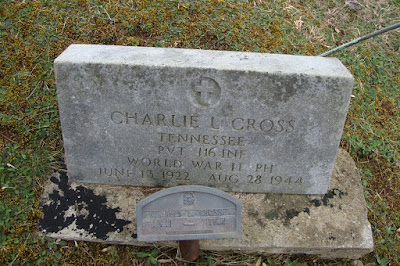 PVT Charles Lee Cross was born 13 Jun 1922 in Fall Branch, Tennessee to Samuel Charles and Margaret Elizabeth (Cox) Cross.  He was raised on the family farm along with his 5 siblings.

"Charlie" entered service in October 1943.  He was assigned to K Company 116th Infantry prior to the D-Day assault on Omaha Beach.  He was killed in action 28 Aug 1944.

PVT Cross was returned to the U.S. and is buried in Double Springs Cemetery in Rock Springs, Tennessee.