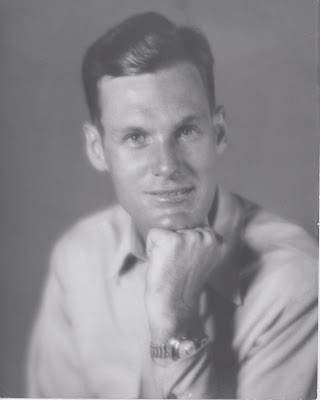 SGT Paul Francis Martin was born 29 Nov 1916 in Baltimore, Maryland.  He was the 2nd of 7 children born to James Oliver and Jeanne Odette (Souaillard) Martin. His mother was a native of London, England. His father worked in advertising and later as an auditor for the telephone company. He reported a 1939 income of $5000 which would be about $90,000 in today's dollars. Paul was also working for the telephone company and reported a 1939 income of $1820 or the equivalent of about $33,000 today.

Paul was drafted in May 1941 while living in Fairfax County, Virginia and likely soon after assigned to C Company 116th Infantry. He would have trained with the unit at Camp Meade, Maryland and Camp Blanding, Florida before shipping out with his unit for England where they trained for the amphibious assault on Hitler's "fortress Europe". PFC Martin was part of the D-Day landing on 6 Jun 1944 but was not wounded until 16 Jun 1944 when he was evacuated to hospital for treatment. He returned to the unit from the replacement depot on 26 Jul 1944. Paul was promoted to SGT on 18 Aug 1944. SGT Martin was killed in action in the attack on Brest, France on 27 Aug 1944.

SGT Martin is buried in the Brittany American Cemetery.
Posted by Hobie at 7:12 AM