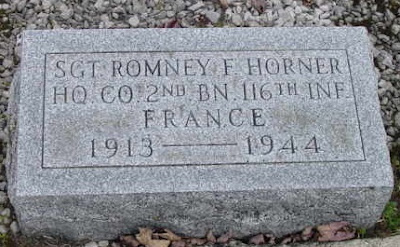 T4 Romney Francis Horner ws born 7 Dec 1913 in Novesta, Michigan to Robert Francis and Ella Catherine (Lewis) Horner. The family farmed. In 1940, Romney was reported on the census as working on the farm.

Romney was working in automobile manufacture and had completed 2-years of college when he was drafted in March 1941. After training as a radio operator he was sent to Europe and on 27 Jul 1944 was transferred from the replacement depot to Headquarters Company 2nd Battalion 116th Infantry Regiment.  T4 Horner was killed in action on 30 Aug 1944.

T4 Horner is buried in Novesta Township Cemetery in Cass City, Michigan.
Posted by Hobie at 4:28 AM

Email ThisBlogThis!Share to TwitterShare to FacebookShare to Pinterest
Labels: HQCo2ndBn