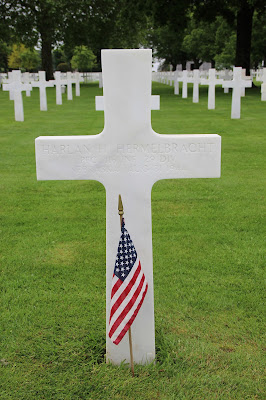 PFC Harlan Herman Hermelbracht was born 2 Jul 1924 in Bancroft, Nebraska to Herman Carl and Bertha (Kessinger) Hermelbracht.  His father died the following year.  It is unclear how his mother supported the family (she had 2 boys age 1 and under when her husband died) and she didn't remarry until after 1930.  Harlan's step-father farmed.

After Harlan entered the service he was sent to England and assigned to I Company 116th Infantry.  He trained with that unit for the amphibious assault that would take place at the French beach code-named "Omaha" on 6 Jun 1944.  He made that assault, survived and on 24 Jun 1944 was promoted to PFC.  On 15 Jul 1944 he was wounded and evacuated to a hospital. Harlan returned to the unit from the replacement depot on  13 Aug 1944.  PFC Hermelbracht was killed in action on 31 Aug 1944.

PFC Hermelbracht rests forever in the Brittany American Cemetery.
Posted by Hobie at 7:08 AM