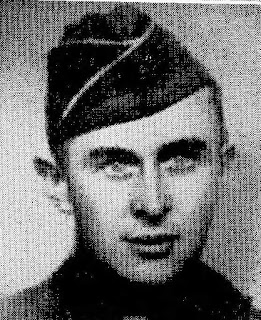 PVT Herbert Hook Mallow was born 13 Nov 1911 in Xenia, Ohio. He was the youngest of 4 children born to Simon Peterson and Ida May (Hook) Mallow. The family farmed. "Herbie" attended Central High School in Xenia. He worked as an expressman and a salesman at Eavey Company in Xenia. On 11 Jan 1940 he married Mary Kathryn Belt, also of Greene County, Ohio.  They would have a son in October 1941.

Herbert was drafted in December 1943 and took his initial training at Camp Blanding, Florida.  He was sent to the European theater arriving on 16 Jun 1944. On 7 Aug 1944 he was transferred from the replacement depot to I Company 116th Infantry. He was again transferred on 14 Aug 1944 this time to A Company 116th Infantry. PVT Mallow was wounded on 27 Aug 1944 and evacuated to hospital but died of his wound(s) that same day.


PVT Mallow rests forever in the Brittany American Cemetery and has a cenotaph at Woodland Cemetery in Xenia, Ohio.

His wife would remarry. Their son, Richard, passed away in 2010. 2 grandchildren survive.
Posted by Hobie at 12:37 PM

Email ThisBlogThis!Share to TwitterShare to FacebookShare to Pinterest
Labels: A Company, BrittanyAmericanCemetery, I Company