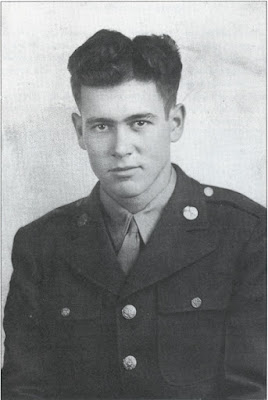 Maurice was drafted in March 1943 spent several months in the U.S. training and recovering from an injury before being sent overseas after 6 Jun 1944.  He was assigned to I Company 116th Infantry on 7 Aug 1944. He was killed on 27 Aug 1944 near Guilers, France.

His family waited until his body was returned to conduct a funeral.  He is buried in Ivy Hill Cemetery in Hardinsville, Kentucky.

There is an extensive story on Maurice's life by Perry T. Ryan which we've tried to avoid repeating but it is mentioned there that PFC O'Connell was awarded the Bronze Star.  We have yet to find the particulars on that award.
Posted by Hobie at 4:56 PM

Email ThisBlogThis!Share to TwitterShare to FacebookShare to Pinterest
Labels: BronzeStar, I Company