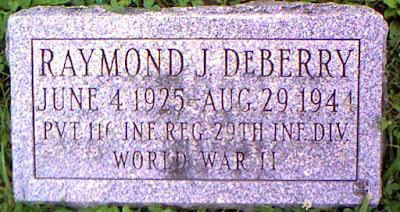 PVT Raymond J. DeBerry was born in Preston County, West Virginia on 4 Jun 1925 to Dewey Chester and Opal Fern (May) DeBerry.  Like most of their neighbors, the family owned and lived off a farm in the county.

PVT DeBerry was repatriated in 1948 and is now buried in the Terra Alta Cemetery in Terra Alta, West Virginia.
Posted by Hobie at 7:40 AM