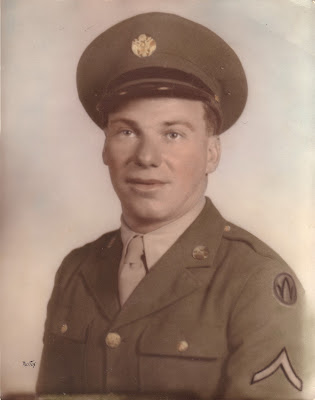 PFC Joseph Trask (Joseph Trzaskowka) was born 21 Mar 1911 in Aberdeen, Washington. He was the 6th of 8 children of Frank Joseph and Agnes (Wawrzynisk) Trzaskawka. His parents were natives of Poland who had met and married in Pennsylvania after immigration. They had anglicized the name to Trask, making it official in 1942. His father supported the family by working in the Polson lumber mill in Aberdeen where he was able to buy a home by 1930 which was valued at $2500 at the time. The home at 321 East Perry Street was only about 2 miles from the mill but on the other side of the Chehalis River. Joseph went to work for the mill as well and moved to 817 West Perry Street, about 1-mile closer to work. Joseph married Gladys Delaney in April 1942 but family life for the couple was soon interrupted.

Joseph was drafted in July 1942. After his basic military training he had at least one assignment and was promoted to PFC. PFC Trask was transferred from the replacement depot to F Company 116th Infantry to serve as a rifleman on 15 Jul 1944 while the regiment was in the vicinity of Saint-Lo, France. He fought with the unit to liberate Vire and it was near there that he was shot and killed in action on 9 Aug 1944.

Joseph was not the only loss his family suffered in WW2. Younger brother, PFC Anton Sam Trask, was captured while serving with K Company 137th Infantry, 35th Infantry Division and killed on 28 Jul 1944, also in France. Older brothers also served. Stanley W. Trask served as a SSG with the 621st Army Air Force Base Unit during WW2. Stephen A Trask served as a PFC in Vladivostok, Russia in the American Siberian Expeditionary Force.