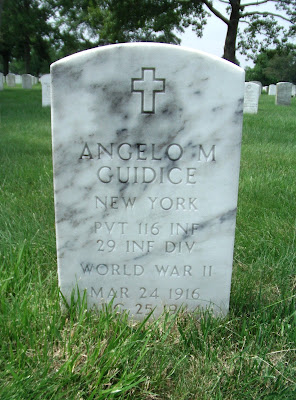 PVT Angelo M. Guidice was born 24 Mar 1916 most probably in Brooklyn, New York, son of Frank Guidice. His father was superintendent of a "dock company". His mother had died before 1920. The family lived with his father's brother and then his paternal grandfather.  In 1936, Angelo was serving as an ordinary seaman on the ship, American Siboney.

Angelo was married and working as a street car conductor when he was drafted in November 1943.  Trained as a rifleman he was then sent to Europe and on 7 Aug 1944 transferred from the replacement depot to I Company 116th Infantry.  He was wounded on or before 25 Aug 1944, evacuated to hospital and died of his wound(s) there on that day.

PVT Guidice was repatriated and buried in the Long Island National Cemetery in East Farmingdale, New York.
Posted by Hobie at 7:28 PM

Email ThisBlogThis!Share to TwitterShare to FacebookShare to Pinterest
Labels: I Company, LongIslandNC