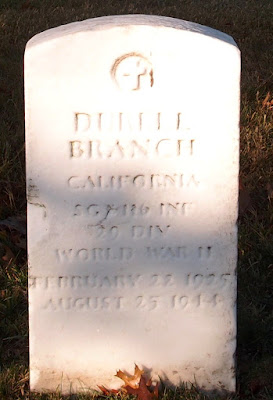 SGT Durell Branch was born 22 Feb 1925 in Paris, Texas to Cicero and Abby Lee (Ray) Branch.  His father supported the family of 7 by variously working for the city and farming.

We can't find when Durell was drafted or enlisted but he was assigned as a PVT to B Company 116th Infantry on 16 Jun 1944, just 10 days after the D-Day landings.  On 27 Jul 1944 he was promoted to SGT.  There is no mention in the morning report of interim promotions to PFC or CPL.  There was also some confusion in the morning report as to his status but he was killed in action on 25 Aug 1944.

In 1948 he was repatriated and buried in Arlington National Cemetery.
Posted by Hobie at 6:30 PM

Email ThisBlogThis!Share to TwitterShare to FacebookShare to Pinterest
Labels: ArlingtonNC, B Company