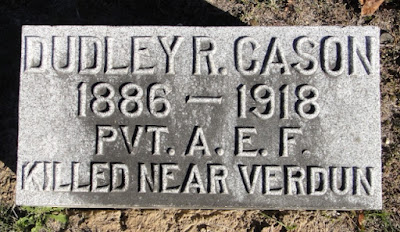 PVT Dudley Robinett Cason was born 25 Jun 1886 in Stephens, Missouri, the 5th of 6 children of Joseph Richmond and Charlotte Ann (McKim) Cason.  His father farmed and his mother was a dress maker. In 1910, Dudley was farming on his own.

After entering the Army, Dudley trained at Camp Pike, Arkansas, Fort Oglethorpe, Georgia and was likely at Camp McClellan with his assigned unit, K Company 116th Infantry, before departing with that unit for France in mid-June 1918.  PVT Cason was killed in action on 14 Oct 1918.

PVT Cason was repatriated and re-interred in Prairie Chapel Cemetery in Fulton, Missouri.
Posted by Hobie at 7:49 PM