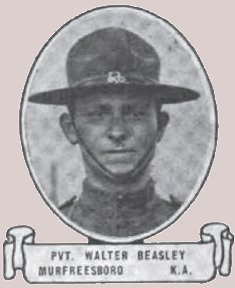 PVT Walter Clay Beasley was born in August 1893 in Hertford County, North Carolina.  Walter was the 4th of 5 children born to Joseph Norcom and Martha (Griffith) Beasley. The family farmed.

After entering the Army,  Walter was assigned to M Company 116th Infantry.  He and the unit sailed for France aboard the USS Finland on 15 Jun 1918. The unit trained for trench warfare and was put into a "quiet" sector.  On 8 Oct 1918 the Regiment was part of a "push" in the Verdun area.  PVT Beasley was killed in action on 12 Oct 1918.

Brother, William Freeman Beasley, served as a PVT in 19th Company 156th Depot Brigade during the war.
Posted by Hobie at 6:10 PM