PFC Winfield Liggett was born 30 Apr 1917 in Spotsylvania County, Virginia the fourth of nine children of Samuel Coffman and Willie Thaxton (Dickenson) Liggett. Samuel was a civil engineer.  In 1940, Winfield was working as farm labor.

Winfield was drafted in February 1942. After basic training, Winfield was sent to England and assigned to K Company 116th Infantry.  He trained with the unit for the amphibious assault on "Omaha" beach and took part in that effort.  He was wounded on 8 Jun 1944 and sent to the hospital.  PFC Liggett returned to the unit from the hospital on 14 Aug 1944.  Serving as an automatic rifleman or BAR gunner, he was killed in action on 25 Aug 1944.

PFC Liggett is buried in the Brittany American Cemetery. 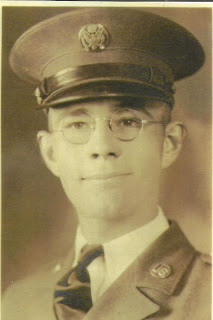