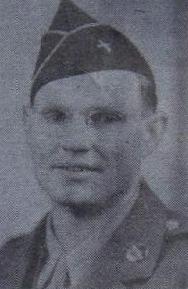 PVT Cecil Glen Pugh was the eldest of two sons of Otis Glenn and Clara E (Barker).  Cecil was born 20 May 1919 in Providence, North Carolina at a time when his father was farming.  Later, his father worked in a printing plant.  In 1940, Cecil was clerking in a grocery store.  On 13 Apr 1941 he married Sarah Ellen Blalock.

Sarah Ellen remarried and lived another 50 years.
Posted by Hobie at 4:54 AM